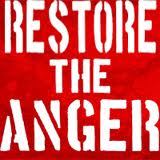 Just this week I saw a variation of this slogan on the bumper of a car in front of me in traffic.  And I couldn’t help but shake me head.  Is this really how we want to be known as a country?  A nation filled with angry people?  A nation that thrives on outrage?

Anger is not always wrong.  There is such a thing as righteous anger.  If your recall, Jesus unleashed a little anger in the temple (John 2:13-22).

But there is a lot of difference between a moment of righteous anger and being filled with anger.

A few days ago I posted an entry about learning to be compassionate in which I referenced an article about the brain science of meditation.  Essentially, scientists have found that we are what we dwell on.  Tibetan monks who spend tens of thousands of hours meditating on compassion are extremely compassionate people.  Their brains light up in a completely different way from an ordinary person’s when they invoke a moment of compassion.  Even newcomers to compassion meditation experience changes in the way their brain works.

This is why prayer is so important to Christian believers.  Prayer centers us not on the world around us, but on Christ.  By focusing our attention on Jesus we focus on his qualities.  Our brains begin to change as we meditate on his love, compassion, healing, and sacrifice for us.  And we gradually take on the image of Jesus.

The more we dwell on Jesus, the more we become like him.  The more our brains shift to reflect the divine love of Christ rather than sinfulness of this world.

So, you can image what image we begin to live into when we fill our brains with constant thoughts of anger and rage.

Jesus’ focus was on love, even when his outburst in the temple shook things up.  For Jesus, his momentary anger erupted because he loved God and had compassion on the poor.  God was being mocked by the money changers, and the poor were being taken advantage of by greedy individuals who identified the visitors to the holy city to be easy targets for a scam.  Jesus’ anger was fueled by his love of God and God’s children, not by hatred.

I realize that the “Restore the Anger” bumper stickers are referenceing a political slogan popular among Tea Party supporters.  But the danger of this mentality is that it goes beyond being a slogan.  And it goes beyond righteous anger.  Rather than focusing on the love and compassion of Christ, it focuses only on a base human instinct which knows nothing of rationality and reason.

Anger blinds.  Anger creates rage.  Anger erupts.  Anger is volatile.  Anger is destructive.  And anger distorts our brains to take on the image of all those things.

You can hold conservative political and theological views and still be filled with love and compassion.

For God so loved the world that He gave His only Son,
so that everyone who believes in him won’t perish,
but will have eternal life.–John 3:16 (CEB)

2 thoughts on “Do We Really Want To Be Angry?”