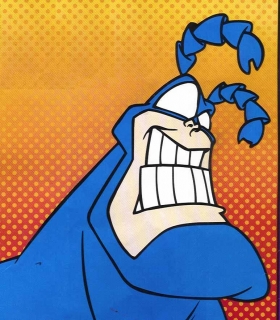 I’m back!  I know I haven’t posted anything in a while for reasons too complicated to explain here.  Who knows… maybe that’s a future post?  But the important thing right now is that I am back!  And I have just discovered something profound about the presence of evil in this world:  Ticks are Satan’s minions.

Let me back up a couple days here:  It had dawned on me early in the week that I have had not had a full day off in nearly a month.  This, by itself, might be bad enough, but it also meant I had not set aside sufficient time in nearly a month for a good Sabbath break.  They warned us about this in seminary.  As ministers we would have to be ever-vigilant about making time in our hectic lives for God to speak to us.  So, I decided late on Tuesday evening that I would take a full day just to be centered on God.

As an introvert who always feels closest to God in the wilderness, I headed for the hills (so to speak… I’m from West Virginia, so I’m always in the hills).  Thursday evening I tossed a tent and sleeping bag in the car, whistled for my dog, and headed to the nearest state park.  The entirety of Friday was spent in quiet contemplation and prayer.  Saturday morning, the tent was tossed back in the car, I whistled for the dog, and headed home feeling refreshed and a little more at peace in my soul.

This brings me to today:  As soon as I was home I began the process of checking for ticks.  When you have been raised in the Appalachian mountains, you are simply born with the knowledge of the “tick check”.

First, I checked the dog.  He was clean.  As he should be.  I religiously dose him with flea and tick treatments.

Then I checked myself.

This is what actually happened in my home today:  I tried to convince myself that it was okay; there wouldn’t be any ticks on me.  I could just go crash in my armchair.

And then I realized I was exhausted.  So exhausted I was willing to forgo the mandatory examination for ticks.  And exhaustion is a symptom of Lyme Disease… which ticks transmit.

This is what ticks do.  They bite you, feast on your blood, transmit a disease that makes you tired… too tired to even find the willpower to check for the ticks that are giving you the dreaded disease.

(Please don’t interrupt my story with the reminder that I had just slept in a tent for the past two nights, that I am not as young as I used to be, and that despite the fact I have more natural “padding” than ever before, the ground has somehow grown much harder since I was a kid and all of that could have something to do with my feelings of exhaustion.  You have clearly missed the point.  We’re not talking about tent-sleeping.  We’re talking about ticks.)

So, I gritted my teeth and began to search myself for ticks.  Each mole and freckle on my body was cause for alarm (I don’t actually have freckles, which is a fact that only causes more alarm should I find one).  The whole time I was silently praying there wouldn’t be any blood-suckers attached to me… and yet, there was the constant fear that I would find one… or worse yet, I would have a tick and somehow miss it!

And all of sudden I remembered the real reason I despise ticks:  they are arachnids.  Arachnids!  That means they are spiders.  SPIDERS!

And ticks are spiders at their near-worst.  They not only are eight-legged (which is reason enough to hate them), they embed their heads in your body and suck your blood… and should you contract Lyme Disease, they can kill you!  Honestly, the only thing worse than ticks are scorpions, which are essentially spiders with pinchers and stingers… and can kill you.

This caused my mind to involuntarily (and very cruelly) conjure up an image my so-called friends had sent me on Facebook a while back.  Apparently after several days of experiencing a tickling feeling deep in his ear, a man went to the hospital and discovered a spider had crawled back into his ear canal and built himself a cozy little home.  The doctor couldn’t resist taking a picture of the spider chilling in the man’s ear;  and ,my “friends” couldn’t resist sending me a copy of the picture.

What if a tick had embedded itself in my ear?

Worse:  What if a tick, after embedding its head in my flesh, laid eggs?  I know, I know!  It’s not biologically possible for that to happen.  But once again, you are missing the point.  This isn’t any tick I’ve picked up.  This is a genetically altered, radioactively-transformed tick from outer space that has attached itself to me.  It can spew eggs into my body through it’s greedy little mouth.  And before I know it, there will be ticks and spiders crawling out of my nose and ears.

Who says that isn’t possible?  People who don’t understand how evil evil can be, that’s who.

Finally, after a very traumatic tick search, I came up clean, and collapsed into my chair and watched an episode of Deep Space Nine, hoping it would be arachnid-free.

What WOULD have happened:  Had I found a tick things would have been very different.  I know from previous experience exactly how I wold react if I had discovered one of the little buggers feasting on me.

First, I would have performed a strange little dance that sort of looks like a small child’s pee-pee dance, only more urgent and more inspired by raw terror.

Then, I would try to flick the tick away, hoping it had not yet sunk its head into my body.

Because that never happens, I would then perform the dance again.  Only with a lot more terror.

With tears in my eyes, I would get a piece of toilet paper and try to remove the tick by twisting it.  I read somewhere that twisting a tick counter-clockwise is the best way to remove it.  Or is it clockwise?  And which way is clockwise in relation to my body, anyway?

Needless to say, the tick would not come loose.  So I would pull.

When the natural elasticity of my flesh stretched with the tick still attached, I would perform my dance one more.  Only with more terror.

Now, fully crying, I would finally squeeze my eyes shut (because the tighter the eyes, the harder a time reality has in getting to you) and yank.

Opening my eyes, I would find the tick removed and now wriggling its eight creepy little legs.

Naturally, I would try to crush it.  But you can’t crush a deer tick.  They’re flat and hard and just sort of laugh at you as you try to squeeze the life out of it.

So, I would toss it into the toilet and flush, watching carefully to make sure it doesn’t somehow make an escape and crawl back out.  Just to be certain I would flush a couple more times… and then stand there, waiting and watching.

Finally, I would just accept that I could never use that toilet again.

And then… then I would collapse into my armchair, remembering that exhaustion is a symptom of Lyme Disease…

Anything that can cause that much emotional wreckage and fear has to be one of Satan’s minions.  Has to be.