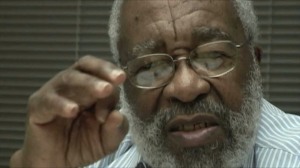 Dr. Vincent Harding passed away suddenly Monday night.  He would’ve been 83 years old this summer.  Many of you probably don’t know who he is, which I guess is fitting, because he was a humble man who was never interested in fame and glory.  His heart belonged to Christ, and his life was spent working for God’s justice, so even if you don’t recognize the name, you certainly live in a world that was made better than it was because of him.

By the time I arrived at the Iliff School of Theology in Denver, Dr. Harding had retired from full-time teaching.  He was still on campus a lot with the Veteran’s of Hope project and was a Professor Emeritus who still guest lectured in classes.  He was a bit of a rock star at Iliff.  We would get excited when we saw him walk into our classroom.  Attendance was usually perfect on days when we knew he’d be there.

When Dr. Harding walked into a room you could feel the presence of the Holy Spirit coming with him.  He was a sage.  A gentle spirit that lived and practiced non-violent world-changing practices, but never backed down in fear from injustice he saw.  He had spent his life standing as a witness of the love of Christ in a world that was ready to crucify that love over and over again with its wars and poverty and inequalities.

Dr. Harding, who had marched, and sat-in, and advocated, and but his body in harm’s way over and over again was the connection I needed to that living history.  He had marched with Dr. King.  He had even drafted Dr. King’s A Time To Break Silence speech, which, upon reading it in college, helped to shape my life philosophy of love and non-violence.

He was the very image of world-changing courage.  A gentle man with a slow, deliberate way of speaking, who put others before himself, who cared more about seeing Christ’s love come to life than his own life–he quickly became a personal hero to me.

But if there is one thing I learned as I sat at the feet of Dr. Vincent Harding, it was that every voice is important, every body of sacred worth, and every soul the breath of God–and as such we all have a story to tell, and we are all a part of a grander story.  We have the power to write and re-write it as we see fit.  When Dr. Harding saw injustice, he went to great pains to rewrite the story into one of justice.

Sometimes, when I lose someone important to me, I make the off-the-cuff comment that the world has lost a great man/woman… but in Dr. Harding’s case, I know it would defy his life work to maintain that attitude.  What he did was never about him.  What he taught us was never meant to die with him, but meant to grow with each of us.  It was only a seed he was planting, he knew that there was still much nurturing that needed to be done to see it sprout and grow and bloom and become ready for harvest.  He gave us each the seed–and he gave us the tools to work with.  Dr. Harding has written the last page of the story he was telling on this earth, and he has passed the book to us.  And I know he will be waiting, watching in that quiet, intense way, to see what we turn this story into.

So, friends (Dr. Harding called everyone “friend”–he was Mennonite, after all)… friends, get up and get a-writing!  Tell your story. And let God’s story of love and justice be told through you.

One thought on “Dr. Vincent Harding: Changing the World One Heart at a Time”