I do remember being a child in the 1980’s, crushing on Michael Jackson (circa Thriller and Bad). I remember watching television shows and movies which portrayed the twenty-first century in uber-futuristic terms.

2017 seemed so far away. Unfathomably far away. I fully believed Back to the Future’s version, complete with self-drying clothes and hoverboards. By this time, we were supposed to have flying cars and regular taxi service to the moon and back.

So, when this meme began floating around Facebook in the days leading up to yesterday’s eclipse, it gave me all sorts of feels: 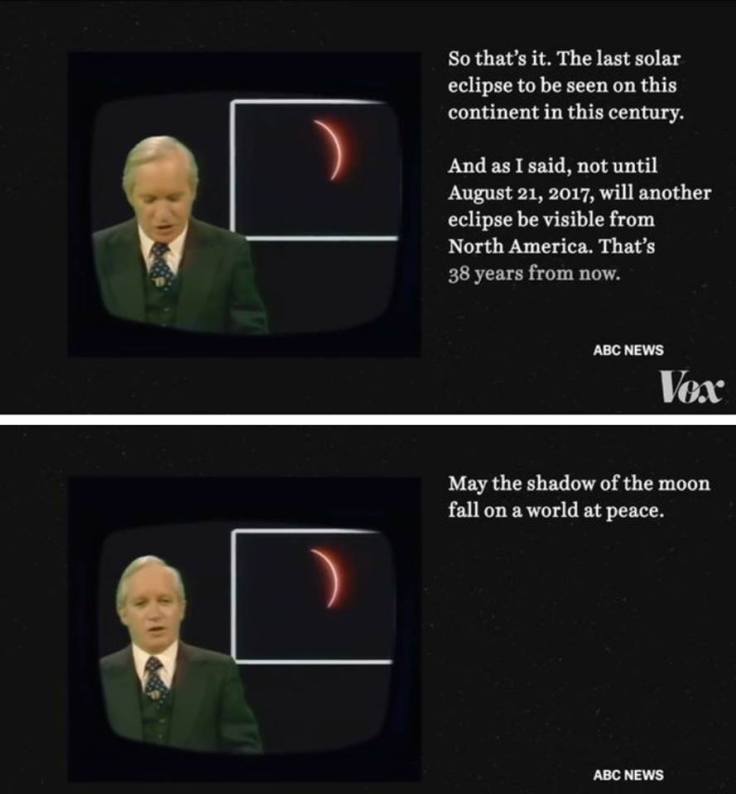 By the time I was old enough to understand how much cruelty of which this world is capable, I was living in a world where I saw horrible and frightening things on the news. From airline hijackings to passenger jets being shot down–from car bombings in the streets of Ireland to the children of Bhopal dying in the streets–from the AIDS epidemic raging through our country to the starvation of children in Africa…

So, like most children, when I thought of the world ahead, I dreamed of a peaceful world. A world where illness and violence and war were gone.

These were the pipe dreams of childhood–and I pray all children dream such bold dreams. But, along the way I grew up and confronted the world head on. Like most, I became mired in the present reality and forgot the youthful dreams of what could be.

In the days leading up to this eclipse the news was full of  rumors of war, Nazi flags being unfurled in American cities, terrorism on the streets of Charlottesville and on the streets of Barcelona. It was in that context that this meme first appeared on my timeline–a sad reminder of the hopes we held for the twenty-first century in the last two decades of the twentieth.

We had such high hopes.

The caption included with this meme was often something along the lines of, “My heart hurts so bad”… and mine did, too.

But then something amazing happened yesterday.

Our country just sort of stopped for a few moments. In unison we turned our eyes to the sky to watch a rare celestial phenomenon. For those of us lucky enough to be in the path of totality as it made its way from the West Coast to the East Coast, we stared at the sky, jaws hanging open, as the moon completely blotted out the sun.

It was nothing short of amazing, although “amazing” is still an understatement.

I watched as the moon slid across the disk of the sun. When nothing more than a thin thread of sun was still showing I watched in disbelief as the moon slowly swallowed what was left of the sun’s light. It went out much like old televisions did–dissolving down into one tiny pinpoint of light before abruptly shutting off. From the house next door came shouts of celebration. From the group of which I was a part, came gasps of wonder.

The heat of the desert had suddenly chilled. Darkness descended all around. The horizon looked like twilight, glowing orange, but not just in one direction. No, we were surrounded by a complete circle of “sunset”.

We whisked off our glasses, anxious for the minute and a half of astronomical beauty and I stood dumbfounded… so that’s what a total eclipse looks like. The corona of the sun burning around the dark shadow of the moon–the moon a perfect dark circle taking it’s moment at center stage before sliding off to the other side.

The first burst of light as the moon continued its journey forced us to look away, to fumble for our glasses… and it brought us crashing back to reality.

As a joke, I updated my Facebook status so that all my East Coast friends would see a “spoiler”. There was no rapture, I told them, we were still “tribulatin’ down here”…

But as I’ve thought more about it over the past few hours, the more I realize that we missed an important, although unspoken, element of the hope that the “shadow of the moon will fall on a world at peace”. We forgot our part in it.

We’ve been so busy staring at the sky, looking for the signs, and hoping for an easy-out that we’ve forgotten the struggle here. The tribulation of this world.

The next total eclipse is seven years away. It will stretch across America, this time from south to north.

I do pray that the shadow of the moon will fall on a world at peace… but for that to happen, we’ve got a lot of work to do in these next seven years. Let’s get busy.