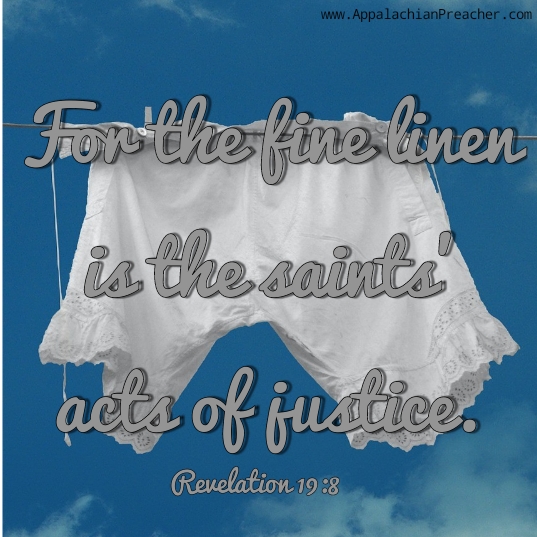 As I sat down to read today’s scriptures I assumed I’d be writing about Revelation being a book of hope and not fear.

One of the most consistent comments I get from church folk about Revelation is that they don’t read it because it scares them… or they have read it and live in fear of the end times.

Revelation is about the triumph of God’s divine reign, though. It’s about the purpose for which God created the universe being fully realized. There is hope to be found in each chapter as the power of sin and evil is whittled away and finally overthrown.

There is tremendous hope in that message.

Yet, despite my assumptions, what jumped out at me was verse 8:

She was given fine, pure white linen to wear,

for the fine linen is the saints’ acts of justice.

I am a Christian in the social justice school. The Wesleyan tradition calls for it:

The gospel of Christ knows no religion, but social; no holiness but social holiness.

Our faith is strongest and most effective when it is lived out loud. This is why God has consistently asked of God’s followers to engage in acts of justice.

Sure, God could just command it and it would be so… but God, from the beginning, has been calling us into an active and reciprocal relationship.

Jesus could have given in to the temptation Satan offered and taken control of all the powers of the world, but he didn’t. Jesus knew that true justice comes when we act in accordance with the will of God.

As Revelation points out, the saints are those who performed acts of justice. They understood that to be in relationship with God was to actively seek God’s justice.

Whether it be healing the sick, advocating for the oppressed, relieving the suffering of those experiencing poverty, or any other act that seeks to make the reign of God obvious and real in this world, our acts of justice are what clothe us.

So, as I read this passage I began to wonder what my heavenly raiments will be like. Will I be clothed in long, flowing robes? I’m a pretty reserved person about my body. I don’t like to show a lot of skin. I’m not even very comfortable wearing shorts in the heat of summer because I’d rather not let the world see me pasty legs. So, I hope I’ll have enough acts of justice to clothe me well. I don’t want scanty heavenly attire!

And I certainly don’t want to find myself naked.